It was a busy week in the men's scene, especially for the ironman athletes at Richland. Down to just five players for second semester, the Roadrunners had three games in the last seven days, and while they lost all three, it is a testament to the team and athletes that they've been able to martial on. Last Wednesday, Richland had a close one with Baraboo, falling 80-72 as Assante Childs, Joey Davidson (Ashland HS), and Cody Haschke (New Lisbon HS) all posted double-doubles for Baraboo in the win. Richland struggled in its next two contests, falling to Wausau 117-50 on Saturday and 121-70 to Sheboygan on Monday. Sheboygan had seven players hit double figures in that game, with a game-high 33 from Delvin Barnstable (Sheboygan Lutheran).

Speaking of Sheboygan, they remained unbeaten and atop the WCC-East after a trio of wins in the past week. In addition to the dominating win over Richland two days ago, the Wombats held off a game Fond du Lac squad 93-89 last Wednesday. Jon Raddatz (Kiel) had 24 points and 25 rebounds, while Barnstable added 19 and 16. On Saturday, Sheboygan ran away from Baraboo on the road, 86-67. Barnstable poured in a game-high 23 points in that one.

While Fond du Lac came up short to Sheboygan, the Falcons did get an exciting 102-100 overtime win against Waukesha on Saturday. Dominique Carr (Brown Deer) led five players in double figures with 31 points, while Nick Brakebush (Westfield) went 10-for-10 from the free throw line to finish with 22 points.

Wausau and Baraboo are neck-and-neck in the race for the WCC-West title, and while their next head-to-head matchup is still a little over a week away, they each have some important games coming up. Wausau travels to rival Marshfield tonight as the Marauders will try to play spoiler. Baraboo welcomes in Marinette for a divisional crossover game on Friday.

East-leading Sheboygan holds a commanding five game lead in the loss column with five games to go. They can clinch the division title with just one more win, starting tonight at Washington. The Wombats also have home games against Manitowoc and Marshfield in the next week.

The race for second in the East Division is jam-packed, with Waukesha, Manitowoc, and Fox Cities all within a half-game of each other. Manitowoc hosts Marinette tonight, while Fox Cities has to deal with an improving Fond du Lac squad. Waukesha welcomes in Marinette on Saturday, while Manitowoc has to travel to Sheboygan. 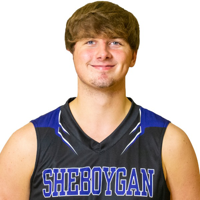 Sheboygan is undefeated in WCC play and just one away from clinching an outright division title. The Wombats got quite a scare last Wednesday, holding off an improving Fond du Lac squad 93-89. First-year player Jon Raddatz (Kiel HS) posted a career-high 24 points in the win, adding 25 rebounds, 13 of them the offensive variety. He wasn't needed to score as much in the team's other two wins last week, totaling just 15 points in blowout wis over Baraboo and Richland.