There were only two Wisconsin Collegiate Conference women's basketball games in the last week, and both involved Barron. The Chargers used a 24-3 edge in the third quarter to pull away from Marshfield in a 54-23 victory last Wednesday. Brandi Gauthier (Bruce HS) led the way with 17 points, while Alyssa Ranney (Chetek-Weyerhaeuser) added 15 for the Chargers.

On Saturday, Barron traveled to Washington, scoring a 69-28 victory thanks in part to a big advantage in the fourth quarter, when the Chargers outscored the Wildcats 24-4. In that one, Krista Lien (Barron HS) scored a career-high 37 points, connecting on six-of-nine shots from behind the three-point line. She would add eight rebounds and seven assists as well. Lien was named the WCC Setter of the Year during the volleyball season.

Only one women's basketball game will be contested this week. It's a rivalry game, as league-leading Wausau will make the short drive to Marshfield. The teams met way back in mid-November, with Wausau scoring a 48-36 home victory. It has been a week-and-a-half since Wausau last played, but in the most recent game against Fox Cities, Patience Pyan (Merrill HS) put up 42 points. As the favorite once again for league Player of the Year, Marshfield will need to find a way to contain her to change up the result from earlier this season between the teams. 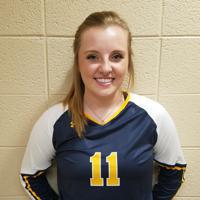 Barron's Krista Lien, a Barron High School graduate, is serious about this student-athlete thing, excelling on the volleyball court in the fall and playing a big role for the Chargers' basketball squad as well. In a win over Marshfield last week, Lien had nine points to help the cause. She carried the team on Saturday in a 69-28 win over Washington, pouring in a career-high 37 points, making 14-of-20 shots overall and six-of-nine from behind the three-point line. Lien also had eight rebounds, seven assists, two steals, and two blocks in the dominating win.