Just one women's basketball game was contested in the Wisconsin Collegiate Conference in the last week, as league-leading Wausau took down Washington 69-32 on Monday. The Huskies pulled away in the second half, outscoring Washington 42-15 after halftime. It was another huge performance from second year player Patience Pyan (Merrill High School) of Wausau, as she posted a triple-double in the victory (more info below). Brittany Ange (Athens HS) did most of the rest of the damage for the Huskies, scoring a career-high 21 points, adding eight rebounds and three assists. Wausau's defense harassed Washington into 24 turnovers and 13-of-56 shooting from the field.

There are two games on the schedule tonight, the last games of the regular season before the playoffs start in a couple weeks.

League champion Wausau will look to close things out against Barron, who will be the number two seed in the WCC tournament. This will be the third meeting between these teams, as they first met back in early December, with Wausau opening things up after leading by just three at halftime, going on to a 70-57 win. Barron led at halftime on January 17th before Wausau rallied for a 52-49 victory. Barron has won three straight games since then.

Fox Cities and Washington also meet up this evening. Fox Cities has been playing much better in the second semester, and in its last outing, gave Wausau some trouble before the Huskies pulled away for a 67-52 win. The first matchup between Washington and Fox Cities went into overtime, as Fox Cities eked out a 37-34 low-scoring win. 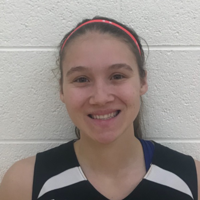 Wausau's Patience Pyan (Merrill HS) continues to dominate the Wisconsin Collegiate Conference, and in a 69-32 win over Washington on Monday, she managed a career first. With 36 points, 16 rebounds, and 10 steals, Pyan posted her first career triple-double, adding six assists as well. She shot 14-of-27 from the field and swiped those 10 steals without committing a foul. The Huskies have wrapped up the first WCC title, as Pyan averages a league-best 28.2 points per game. It is the third Player of the Week award for Pyan this season, as she has five in her career.