It was an extremely busy week in men's basketball WCC action, one of the busiest of the entire year.

Sheboygan wrapped up an outright WCC-East title with a trio of hard-earned victories in the last week. Last Wednesday, the Wombats rallied from an eight-point halftime deficit against Washington to claim a 96-89 win, outscoring the Wildcats 57-42 after halftime. A balanced scoring attack saw five players reach double figures for Sheboygan, who needed all of it to overcome a 48-point outburst by Washington's David Britton (Mountaintop Christian), who drilled ten, three-pointers in the game.

Things were a bit easier for Sheboygan in Saturday's 114-88 win over Manitowoc that saw the Wombats race to a 66-30 halftime lead. Once again, five players hit double figures. Sheboygan closed things out with a 98-86 win over Marshfield, as Delvin Barnstable (Sheboygan Lutheran) and Jalen Brown-Morrow (Messmer) shared team-high honors with 24 points.

The WCC-West race got even more interesting heading into the final few games, as Wausau is now percentage points ahead of Baraboo, this despite Wausau losing its only game of the week, a 97-87 setback against Marshfield. However, Baraboo lost twice, as its losing streak now sits at three in a row after falling at home to Marinette and on the road against Washington.

Fond du Lac's Nick Brakebush (Westfield HS) had 40 points in an overtime win against Washington Saturday after putting up 27 in a loss to Fox Cities last Wednesday.

It appears the WCC-East title will come down to the final game of the season. Baraboo enters the week at 7-4 in conference play and hosts Marshfield this evening. The Marauders have been playing well lately, winning three of the last four, with the only loss a very competitive game against Sheboygan.

Regardless of what happens in that game, Baraboo can still get at least a share of the league title on Saturday when the Spirits welcome in Wausau, who is 8-4 in league play. If Baraboo beats Marshfield on Wednesday, the winner of Wausau and Baraboo is the outright league champion. If Baraboo loses to Marshfield, the Spirits would need to beat Wausau to force a share fo the conference crown, while a loss in that scenario would hand the outright title to Wausau. 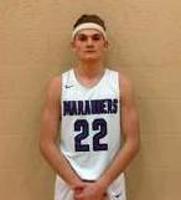 Marshfield is coming on strong late in the year, and second-year player Jack Bezlyk (Spencer HS) is a big reason for that success. In helping the Marauders to a 2-1 record on the week, Bezlyk averaged 19.7 points per game, including a team-high 26 as the team gave league-leading Sheboygan all it could handle in a tough loss. Bezlyk also posted 13 rebounds and four steals per contest in the three games.