What a start it has been for the UW-Marathon women's basketball team in 2017. The Huskies are 4-0, and averaging more than 101 points per game. That includes a 132-18 win over Fox Valley last Wednesday and a 114-32 victory at UW-Marshfield earlier this week. Morgan Rachu, a sophomore from Marathon High School and a 2016 WBCA Division 4 All-State selection, has put up staggering numbers, averaging 37 points and 14.8 rebounds per game thus far. Jayci Blume, also a member of Marathon High School's 2016 state tournament team, is averaging 20.5 points per game as well.

UW-Waukesha is 4-1 on the season, with the lone loss a 91-77 setback against UW-Marathon back on November 11th. The Cougars scored a very nice 88-77 victory over Milwaukee Area Technical College on Monday. Hannah Bricco (Mukwonago) and Justice Hawkins (Wauwatosa West) each average more than 20 points per game.

UW-Washington has just one game under its belt so far this year, a 49-39 defeat of Marshfield, but things pick up considerably for the Wildcats, who play four games in nine days from December 1st through December 9th. 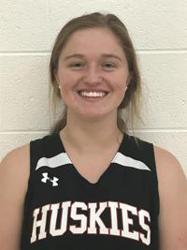 UW-Marathon's Morgan Rachu was the WCC Women's Basketball Player of the Year in 2016-17, averaging 19 points and 14 rebounds per game. She has been even better this season, averaging 37 points and 14.8 rebounds per contest through four games for the Huskies. That includes a career-high 45 points against UW-Waukesha earlier this year, which she nearly matched in a 43-point outburst at Marshfield on Monday. Rachu is shooting 58.1% from the field overall, 38.5% on three's, and 84.2% at the line while leading the team in points, rebounds, assists, steals, and blocks.