On Saturday, Washington held off a late charge from Marinette to hold on for a 64-61 win, despite 36 turnovers. Megan McFarlane scored 17 points to lead the way.

The Wildcats would fall to UW-Waukesha, 91-61, last night however. Hannah Bricco had a monster game, pouring in 40 points with 6 rebounds, 6 assists, and 4 steals.

UW-Marathon eclipsed the 100-point mark for a fourth straight game, defeating Baraboo's club team 108-54. Morgan Rachu (Marathon), who is now averaging 39 points per game, had 41 in the victory, connecting on 15-of-24 shots to go with 13 rebounds.

With schools wrapping up first semester and moving into the holiday break, there is a gap in the WCC Women's Basketball schedule for several weeks. As a result, we'll take a break from the weekly update until Wednesday, January 3rd. 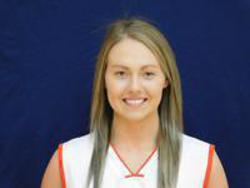 It wasn't the cleanest game, as the Wildcats committed 36 turnovers, but they found a way to get the victory, defeating UW-Marinette 64-61 on Saturday behind career highs in points (17) and rebounds (9) from Meghan McFarlane. Washington is now 3-2 overall and in conference play. Their next game is set for December 30th at Marathon.