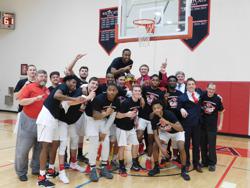 The WCC-East race was wrapped up a long time ago, but UW-Washington kept the foot on the gas, capping an unbeaten league schedule with victories over Waukesha (77-64) and Fond du Lac (100-61) last week. However, fans were deprived of a special treat when Washington's game against West champion Rock was canceled since it didn't impact the standings. The game had been postponed several times previously.

Speaking of Rock, the Rattlers secured a West Division title with a 111-79 victory over Marshfield on Saturday. David Harper led four players in double figures with 30 points.

UW-Marathon was hoping to get itself in a position to push for the West title, but Rock's win coupled with Marathon's 85-78 loss to UW-Baraboo leaving the Huskies 2.5 games out in the final standings.

UW-Sheboygan closed the year with a pair of victories in the last week, beating Fond du Lac 90-38 last Wednesday and Manitowoc 84-68 on Saturday.

It is on to the playoffs for WCC men's teams. The quarterfinal action in each division takes place tonight at 7 pm, with semi-finals on Saturday. The winners of those semifinal games will head to the WCC State Tournament, which will take place Saturday, February 24th and Sunday, February 25th at JustAGame Fieldhouse in Wisconsin Dells.

UW-Rock clinched a WCC-West Division championship this week, finishing 2.5 games ahead of UW-Marathon in the standings. The Rattlers secured the title with a 111-79 win over UW-Marshfield on Saturday, as David Harper was outstanding. He finished with a game-high 30 points while adding 8 assists, 6 steals, and 4 rebounds.