Marinette continues to lead the WCC-East Division, as the Buccaneers won two games last week. The first was surprising in that Marinette was awarded a forfeit victory over Marshfield for last Wednesday's game. Marshfield was one of the league's top teams for many years, but were forced to cancel last week. It is expected that Marshfield will return to a regular schedule beginning tonight.

The Buccaneers of Marinette did make the trip all the way across the northern part of the state to take on Barron on Saturday, and they proved to be up to the challenge, coming away with an 83-69 victory.

Sheboygan managed to stay just a game behind Marinette in the East standings, but it didn't come easy. The Wombats traveled to Marathon on Saturday and built a comfortable 44-30 halftime advantage. The second half was anything but comfortable, as the host Huskies rallied before Sheboygan narrowly held on for a 66-65 victory. Quentin Beaudoin and Dylan Martens led the way with 16 points apiece for Marinette.

As a former head men's basketball coach at UW-Richland from 2003 to 2006, it was disappointing to learn that the school was forced to cancel their second half schedule due to a lack of eligible athletes. The remaining Roadrunners' games were simply canceled and no forfeit victories will be provided to opponents. Richland had been in first place in the WCC-West after first semester.

Manitowoc has also canceled its season after first semester.

It is a busy week on the WCC men's basketball schedule, with a full slate of games this evening, on Saturday, and next Monday. Sheboygan has three games during that stretch, welcoming in Rock tonight, traveling to Barron on Saturday, and then a huge showdown with league-leading Marinette on Monday in Sheboygan.

Marinette and Sheboygan played back in early December, with Marinette pulling away for a 77-66 victory behind a balance scoring attack. Sheboygan has not lost a game since, rattling off six straight victories. Marinette is a game up in the standings currently, and a victory could pretty well seal up the WCC-East title.

Waukesha is two games back of Marinette, and the Cougars hope to keep lurking around. The team has three games in the next week: non-conference games against Maranatha Baptist and Marshfield before a league showdown with Fox Valley.

Marathon sits atop the WCC-West with Richland dropping out, and the Marauders are guaranteed to remain there for another week, as their non-league game with Manitowoc for tonight is canceled and their only other contest is a non-conference meeting with Fox Valley. 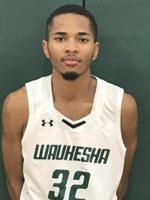 Waukesha's Jeremy Ninham (Nicolet High School) averages just nine points per game while shooting 40% from the field, but he exploded for a career-high on Saturday as the Cougars topped Baraboo 77-70. Connecting on 14-of-23 shots from the floor, Ninham had a career-best 36 points, adding six steals and four rebounds as well. Ninham scored six points in a win over Rock last Wednesday, then chipped in 11 points as the Cougars fell to the Concordia JV squad on Thursday.