The action was hot and heavy over the last week in the WCC. Beginning in the East Division, Sheboygan swept a trio of games, pulling into a tie atop the division with Marinette. Last Wednesday, the Wombats got all they could handle from Rock before rallying in the second half to win 79-73 behind a Herculean effort from Dylan Martens (Sheboygan South), who finished with 34 points and 20 rebounds. Martens would add another double-double in a tough 77-69 road victory on Saturday against Barron, scoring 16 points with 15 rebounds. Steve Sokolowski (Sheboygan North) had a triple-double in that one with 20 points, 12 rebounds, and 11 assists.

The main event came on Monday, when Sheboygan, the second-place team at the time, welcomed in division-leading Marinette. The trio of Martens (27 points, 10 rebounds, 4 steals), Sokolowski (12 points, 11 rebounds, 6 assists, 6 steals), and Quentin Beaudoin (Sheboygan North; 19 points, 6 steals, 4 rebounds) led the way in a 75-61 victory, as Sheboygan is now tied for the top spot in the WCC-East with Marinette at 10-2 in league play.

Waukesha also won three games in the past week. After dispatching Maranatha Baptist 79-55 on Thursday, the Cougars hammered Marshfield 91-46 on Saturday as Jayden Hardy (Nicolet) had a game-high 27 points. Waukesha finished off a run of three games in five days with an 84-69 win over Fox Valley, breaking open what had been a tie game at halftime. Five different Cougars players reached double-figures, as Hardy again had 27 points to go with 16 rebounds.

Marathon remains on top of the WCC-West Division as the lone team with a winning conference record, as the Huskies sit three games ahead of second-place Baraboo. Marathon was dominant in its lone game last week, topping Fox Valley 108-51. Five players reached double figures and and ten different Huskie players scored in the game. Fred Nunez made 10-of-13 shots from the field and finished with a game-high 24 points.

Sheboygan and Marinette continue to be neck-and-neck in the WCC-East, and each has one conference game and one non-league contest in the next week.

Marinette takes on Fox Valley on the road on Saturday, then welcomes in Bay College on Monday night as the Buccaneers look to rebound from last week's loss to Sheboygan.

Speaking of Sheboygan, the Wombats have now won nine straight games dating back to early December. They travel to Fond du Lac this evening (weather permitting), before a tussle with Maranatha Baptist on Monday. 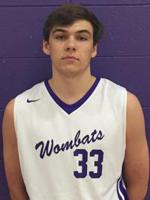 The award could have easily gone to Sheboygan's Dylan Martens once again, but the impact his teammate, Steve Sokolowski, had in the last week was just as immense. The Wombats went 3-0 in a trio of hard-fought games, and Sokolowski was superb. He had eight points, 14 rebounds, and 12 assists in a win over Rock, then posted a triple-double as the team held off Barron, finishing with 20 points, 12 rebounds, and 11 assists. He capped his week with a 12 point, 11 rebound, six assist, six steal game against Marinette that pulled Sheboygan into a tie for first place in the division.