WISCONSIN DELLS - As the UWM-Waukesha men's basketball team hoisted the shiny, gold trophy plaque high in the air, it's goal of winning a state championship became a reality.

It was the fifth consecutive victory, the final step of a long, demanding journey and completed an impressive postseason run for UWM-Waukesha, which finished the season 18-10 overall.

The pressure-packed performance took on added significance as it avenged two stinging regular-season losses to WCC East regular-season co-champion UWGB-Sheboygan and clinched the Cougars' second state title in the last three years - re-affirming their long-standing reputation as one of the premier junior college programs in the state.

UWM-Waukesha trailed 30-29 at halftime but answered with three straight baskets from 3-point range to power what proved to be an explosive 14-5 run - including 11 unanswered points - over the course of the opening six minutes of the decisive second half.

Freshman guard Jake Antczak from Mukwonago ignited the key scoring surge by converting a critical long-range, high-arcing 3-pointer from the top, left portion of the perimeter on the Cougars' opening possession to regain a 32-30 lead with 18:44 remaining.

"Being down by one point, we just tried to come out strong, start fast and play tough to set the tone in the opening minutes of the second half," said Antczak, who contributed six points, four rebounds, four assists and a steal. "The coaches told me to shoot so I just went out there and let it fly. It was a great feeling to hit a big shot to regain the lead.

"We've worked so hard for this so to finally see it happen was incredible. From day one of practice, our goal has been to win a state championship and there's truly nothing quite like it."

Freshman wing Jeremy Ninham from Nicolet had five consecutive points during the momentum-shifting run, highlighted by a 3-pointer and a hard-driving layup to extend the lead to 40-30 with 15:41 left.

"I'm so happy and words can't even explain the feeling right now," said a smiling Ninham, who finished with 12 points, 4 of 5 free throws, four rebounds and an assist. "From the beginning, we've worked hard each step of the way and put ourselves in position to win a championship. Looking back, I'm just really proud of the team and what we accomplished."

Sophomore wing Jayden Hardy from Nicolet registered an impressive double-double by contributing a game-high 23 points with three 3-pointers, 4 of 4 free throws, three blocked shots, two assists and a steal.
Hardy scored 16 points in the second half, capping the statement-making performance by making four straight free throws within the final minute to put an exclamation point on the victory.

"We just won the championship and I'm truly speechless," said Hardy, who was named to the WCC Final Four All-Tournament Team. "Throughout the game, we continued to push, did our best and came away with the win.

"After we came out hot to start the second half, we talked at the timeout about maintaining that same energy on every possession. That's when we were able to take advantage of the momentum, build on the lead and put the game away. It really hasn't all sunk in yet so I'm just going to embrace it and enjoy the accomplishment."

Freshman wing Tyler Torosian from New Berlin West had nine points and five rebounds for the Cougars, who converted 10 3-pointers, 9 of 11 free throws and shot 37.9 percent from field-goal range.

"This game was an accurate representation of the team and how we battled through all of the adversity this season," said Torosian, who provided a key spark in the first half and capped the effort by going up strong for a rebound and putback to tie the game 27-27 with 1:20 left in the first half. "As with the season, we struggled at times in the first half but then came back strong during the second half to solidify our place as the top team in the league. Being a tight, close-knit group, it was a surreal experience watching the time wind down, hearing the final buzzer and realizing we were the state champions."

Sophomore forward Ben Schaefer from Muskego chipped in five points, five rebounds, four steals and two assists for UWM-Waukesha, which showcased its depth with seven players reaching the scoring column and outrebounded the Wombats 40-32 - including a 29-24 advantage on the defensive glass. Sophomore guard Jackson Kunnert (Pewaukee, Wis.), who was also named to the all-tournament team, had five points for the Cougars.

"It's a great feeling but really hard to put into words," said Meyle, who slowly walked to the sidelines with Hardy to a well-deserved ovation with 15.7 seconds left. "From beginning to end, it took a lot of hard work, dedication and steady improvement throughout the season to get to this point. After losing to Sheboygan in the playoffs last year and twice this season, it was nice to be able to turn it around. At the end of the year, we knew that when the postseason arrived, we would win when it counted the most. It was awesome walking off the court with Jayden, giving coach Ligocki a hug and enjoying the moment."

UWM-Waukesha sixth-year head coach Adam Ligocki was ecstatic about the way his team rose to the occasion and played its best basketball over the course of the final four games of the season.

The resilient Cougars defeated three conference champions (including WCC East co-champions UWGB-Marinette, UWGB-Sheboygan and West champion UWSP-Marathon) on the road in the playoffs en route to the championship.

"We came out in the second half, hit three straight 3-pointers and it became the defining moment in the game," said Ligocki, who was doused with water in the lockeroom by his jubilant team during the postgame celebration. "As that happened, our confidence rose significantly, the momentum shifted in our favor and we never looked back. Coming into the finals, UWGB-Sheboygan was the only WCC team we hadn't beaten so to be able to get a victory with a championship on the line was a very special accomplishment.

"It's a true testament to the guys, how they battled through all of the adversity this season and persevered in the end. This was the most competitive group I've ever coached so I was very happy for all of them but especially for all of our second-year players. Now their names will be on the championship banner and always remembered."

Sophomore guard Oscar Morales scored a team-high 15 points with five 3-pointers for UW-Sheboygan, which finished as the state runner-up for the second straight year and ended the season 19-7 overall. Sophomore post player Dylan Martens had a double-double with 11 points, 10 rebounds, two assists, two blocked shots and a steal for the Wombats, who made eight 3-pointers and shot 36.2 percent from the field. 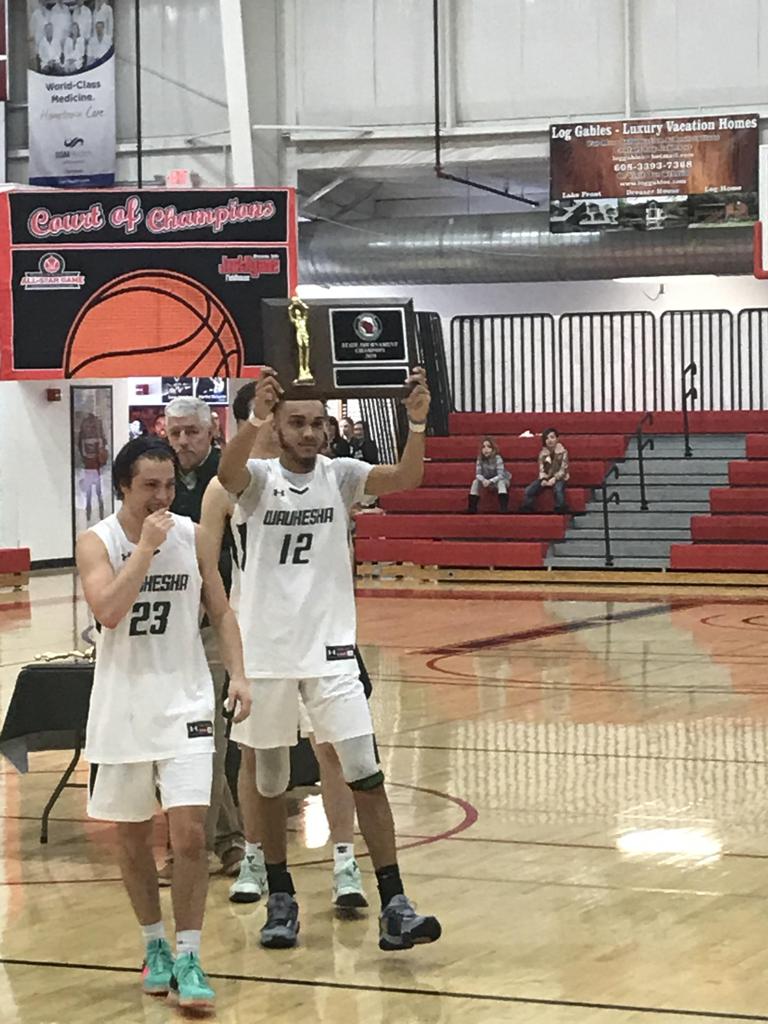